Vman Magazine (you know the Humongous looking magazine that take up all the space at your local Barnes and Nobles) recently caught up with OKC Thunder superstar/fashlete Russell Westbrook. The young fashion trendsetter, Westbrook gets in-depth on his personal style with Vman as they discuss his favorite shopping spots, his trademark frames, Self-proclaimed of trendsetter, Jordan xx8 sneakers & more. Russell’s teammate Kevin Durant recently named the top 5 dressed NBA players with GQ  during 2013 All Star weekend, and mentioned that  Russell  doesn’t have a stylist, which is pretty impressive, knowing that he developed his own style.Check out Russell’s spread with Vman, and also preview of the interview below, Click to read more.

Russell has made the eccentric print shirts popular in the league,so it would only be right to wear one for this shoot, and that varsity jacket is Fresh! Jacket by Paul Smith, Shirt;Black fleece by Brooks Brothers, Glasses by Morgenthal Frederics. 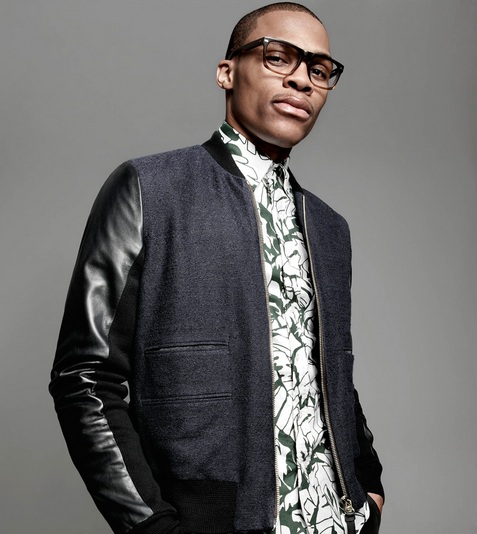 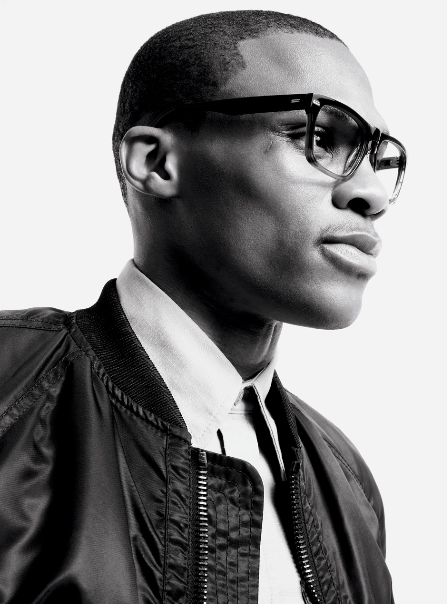 You hashtagged it #trendsetter.
RW Yes. From time to time I definitely start seeing people do things after I’ve done them, especially on Twitter and other social media. People always hashtag my name.

Oklahoma City isn’t known to be the most fashionable place. Where do you shop?
I do it on the road when we go to big cities—New York, L.A. I also do a lot of online shopping from places like TopMan, FarFetch, and Urban Outfitters.

What sort of designers or specific items are you into right now?
RW Right now I’m really into Paul Smith, but I wear everything. I’m into cutoff jean jackets, leather stuff…

Do other players ever resent you for your style reputation?
RW They do try to clown on me from time to time, but I don’t pay them any mind. If anything, though, they’re trying to figure me out, to see what I’m going to wear next.

Russell’s eclectic style has also caught the eye of Italian Vogue’s ‘L’Uomo Vogue’ as they assemble a small piece(Writtin by Tim Small) on  Russell’s mix of style and athletic performance.Click to read full article.Small preview below.

Russell Westbrook combines these two aspects – style and athletic performance – of modern-day basket perfectly. Long-limbed and elegant, but also muscular and extremely fast – he almost seems to be made of rubber, like a ball that bounces crazily – the very young point guard for the Oklahoma City Thunder, besides being one of the most interesting basketball stars in the world, is also, and without a doubt, the division’s best dressed.