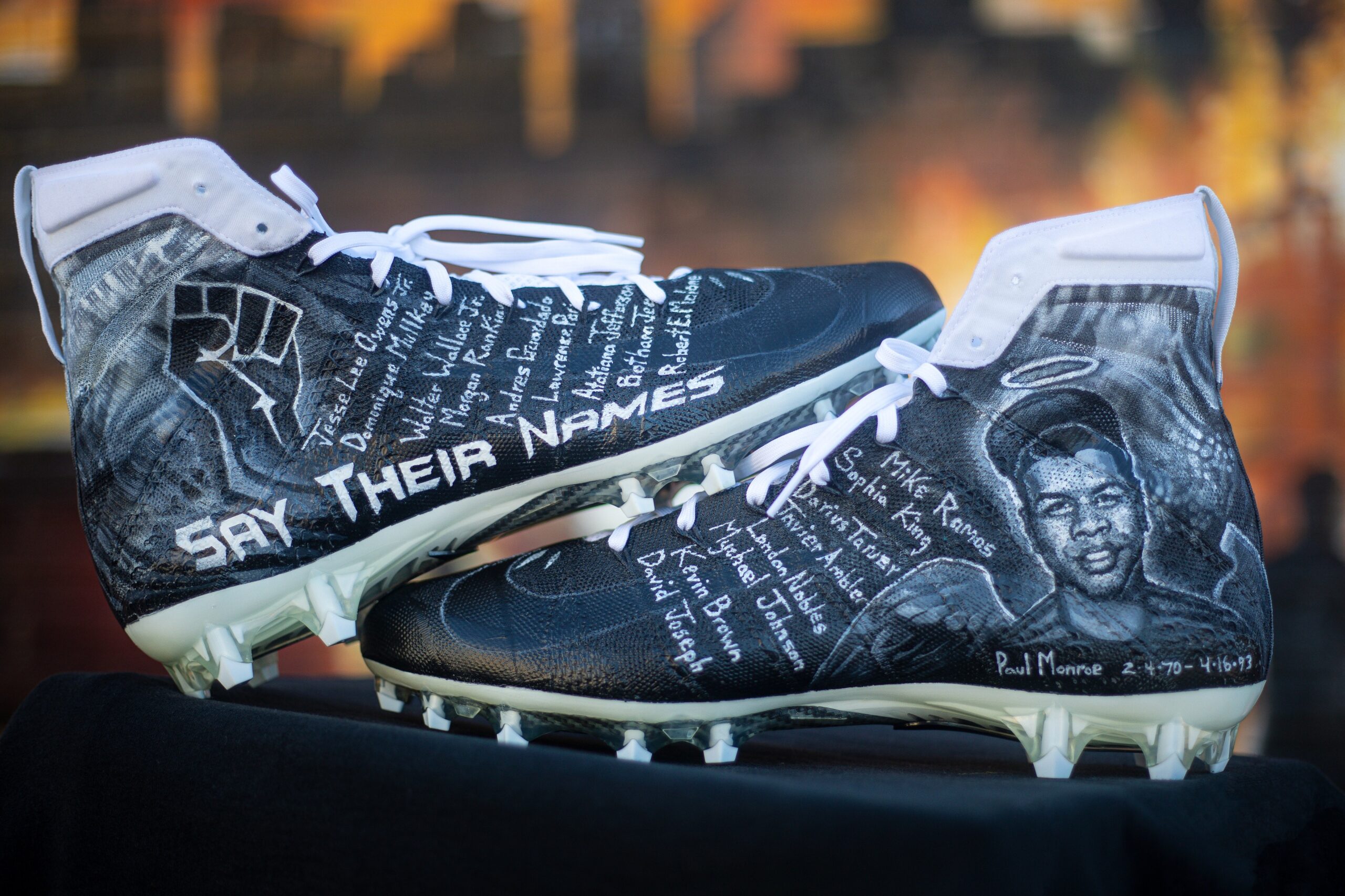 NFL players had the opportunity to share causes that are important to them during all Week 13 games, as part of the NFL’s My Cause, My Cleats campaign.

A great example is Buccaneers RB Ronald Jones II who had a pair of cleats designed that brought attention to police brutality and racial injustice. His cleats include an image of his sister’s father Paul Monroe who lost his life at the hands of the police, as well as an symbolic black fist and names of other black people affected by police brutality.

Check out Q& A below Ronald was part of as he shared the story of his cleats.

2. Why did you choose this cause?

I wanted to bring awareness to an issue that affects Black and Brown families every day especially since it’s one that has hit my home directly. My sister’s father, Paul Monroe, was killed by police decades ago and my classmate, Darius Tarver, was killed this year. This is an issue that Black people have dealt with long before the murders of George Floyd and Breonna Taylor and it’s an issue that my Black teammates and I face when we leave the football field every day. We cannot avoid having conversations about racial injustice and we need to always say the names of those who’ve lost their lives. This is my tribute to them!

3. Why did you choose to support Mothers Against Police Brutality?

We wanted to partner with an organization created by people who’ve been directly impacted by police brutality making a difference in the lives of individuals who share their stories. Mothers Against Police Brutality is working to change policies and practices of law enforcement in Dallas, Texas and across the US.

4. What is your goal in supporting this organization?

5. Who is Paul Monroe and why are you honoring him?

I wanted to bring awareness to my closest family member who was killed by police. My sister’s father, Paul Monroe, died after being shot by a police officer in Austin, Texas, on April 15,1993. I still witness the impact his death has on my granny, mother, sister, family and friends. The aftermath is lifelong and the wounds are reopened after every reported incident. Also, I am especially inspired by my sister who had to grow up without a father. I’ve seen all the work she’s put in to make her father’s name known. This season is dedicated to him!

6. What happened to Paul?

I encourage you to read my sister’s story about her father at https://www.vox.com/first-person/2020/8/14/21362387/police-brutality-black-lives-matter-protests-george-floyd.

7. What are your thoughts on Colin Kaepernick and the efforts he’s made in the past?

I’m grateful for the work he’s done. To my generation of professional athletes, he paved the way!

8. How do you feel about “defunding” the police?

Another reason we chose to support Mothers Against Police Brutality is because they encourage policies that invest in the health, housing, household incomes, human rights, creative arts, and overall well-being of our communities. I didn’t study politics or social justice in college but I think it’s clear that whatever we’re doing now isn’t working and it’s time to do something different. We need to explore other potential solutions to eradicate police brutality.

9. Tell us about your cleat design and what inspired it?

My Nike cleats were designed by my sister Montinique Monroe and brought to life by a Black artist based in Austin,Texas named Chris Rogers. I wanted to honor my sister’s father, Paul Monroe, but we knew we couldn’t stop at him. We included 17 additional names of victims of police brutality who were from my home state of Texas and my adopted communities in California and Florida, and more. Their names are:

The Black Power fist symbolizes solidarity and we put the well-known “say their names” phrase in large letters because we want people to know the names of these individuals whose deaths weren’t high-profile or didn’t go viral. It’s important we say their names too.