To make sure we end 2013 off right, More Than Stats teamed-up with Naz Perez of Sideline Styles to present to you our curated list of the most memorable moments in sports fashion this year. Check it out below, we can’t wait for 2014!

And coming in at our #1  Biggest Sports Fashion Moment of 2013, is when Miami Heat star Dwyane Wade wore capris to Game 4 vs. the Chicago Bulls. Wade’s pants made headlines around the world – more than the actual game itself! via @nba The self-proclaimed “Fashion King” Russell Westbrook has been living up to his name. His eccentric off-court style has got the NBA guard lots of love from the fashion industry this past year. Russell has sat front row at notable runway shows, became bff’s with Vogue editor-in-chief Anna Wintour, and snagged a few features in major fashion publications such as Vogue, GQ France, Flaunt, and Esquire. Russell is the athlete to watch right now in fashion.

You know you’ve made it big when Joan Rivers has something to say about what you’re wearing. This year E!’s Fashion Police took a dive into the sports fashion world with a month long segment called “Fash Fabness” where they named their “Sweet Sixteen Most Stylish Athletes” (in honor of NCAA March Madness tournament) most stylish athletes this past March.

This year superstar athletes had the opportunity to express their passion for the business side of fashion.

NBA baller/trendsetter Dwyane Wade built off his fashion buzz with two collaborations, he launched a tie & accessory line with The Tie Bar, and a funky sock line with Stance Socks. 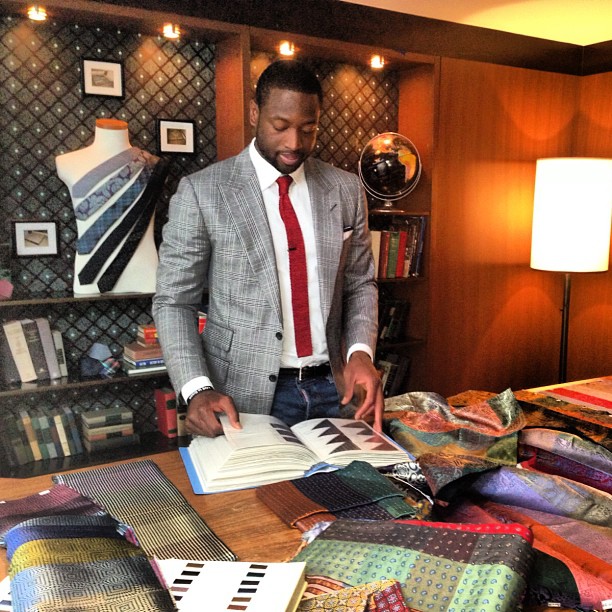 When the President of the United States welcomed the 2012 NBA Champion Miami Heat to the White House in January, Dwayne Wade sparked controversy when he wore a pair of Christian Louboutin Golfito Rose Paris flat leather sneakers to the event. Many thought it was an interesting choice of shoe wear to have on a meeting with the President. This past September, NFL star Victor Cruz was named ‘Most Stylish Athlete of the Year” at the 10th annual Style Awards. Well-deserved, Victor’s style has really progressed, he’s took the fashion industry by storm putting NFL players on the map when it comes to style. You can find Victor gracing the pages of some of your favorite fashion publications, and front row at the dopest runway shows around the globe.

7)  Red Is The New : Amare’ Stoudemire gets married in custom Lanvin suit & LeBron James accepted “Athlete of the Year” at the ESPY’s in custom Waraire Boswell suit.

Red is a very powerful color and a very hard one to pull-off at that.

NBA players Amar’e Stoudemire & LeBron James donned the color in absolute perfection at two iconic black-tie moments this year showing men all over the world, red is the new black.

Fútbol star Lionel Messi showed us how stylish he is with the fashion statements he made with his choice of attire for two prestigious award ceremonies this year.

Lionel Messi first grabbed our attention with his Polka Dot Dolce & Gabbana tuxedo jacket and bow tie combination he donned for the Ballon D’Or ceremony earlier this year. Lionel was awarded with his fourth-consecutive FIFA Ballon d’OR Award that night.

FYI: The polka dot blazer was exclusively designed for Messi by Dolce & Gabbana.

You can deem yourself “best-dressed” as much as you want, but it isn’t official until Vanity Fair says so. This year Vanity Fair named: 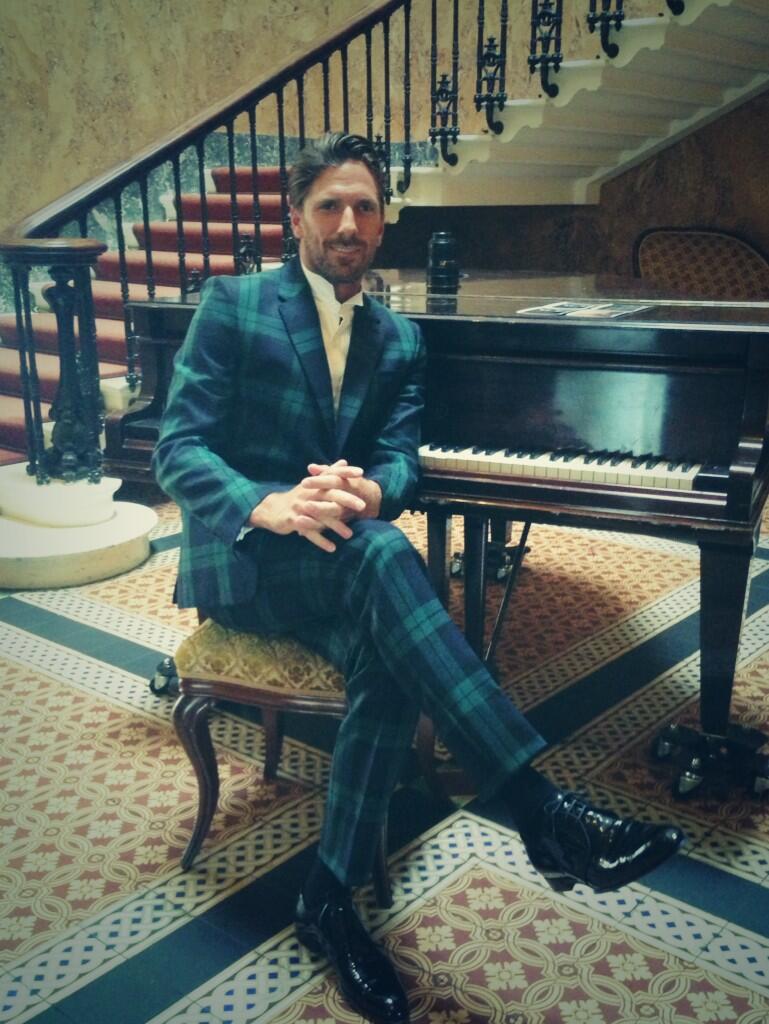 The “Mens Style Bible” GQ Magazine recently named their “20 Most Stylish Athletes Of 2013” leading the list was none other than LeBron James who was ranked at #1. The 3-time NBA MVP is looking to take over the fashion game next.

We all know the playoffs (a.k.a. the NBA’s fashion week) bring out the crazy in some athletes’ wardrobe.

However, I don’t think anyone saw it coming when Memphis Grizzlies guard Mike Conley Jr. wore a WOODEN bow tie to game 4 vs. Oklahoma City Thunder. Not to mention start a trend and putting the Two Guys Bowtie Co. on the map.

Shortly after Conley wore the bowtie, we noticed Ray Dalton’s wooden bowtie at the MTV movie awards, & the NBA’s very own style correspondent Lance Fresh rocking one as well. #trendsetter 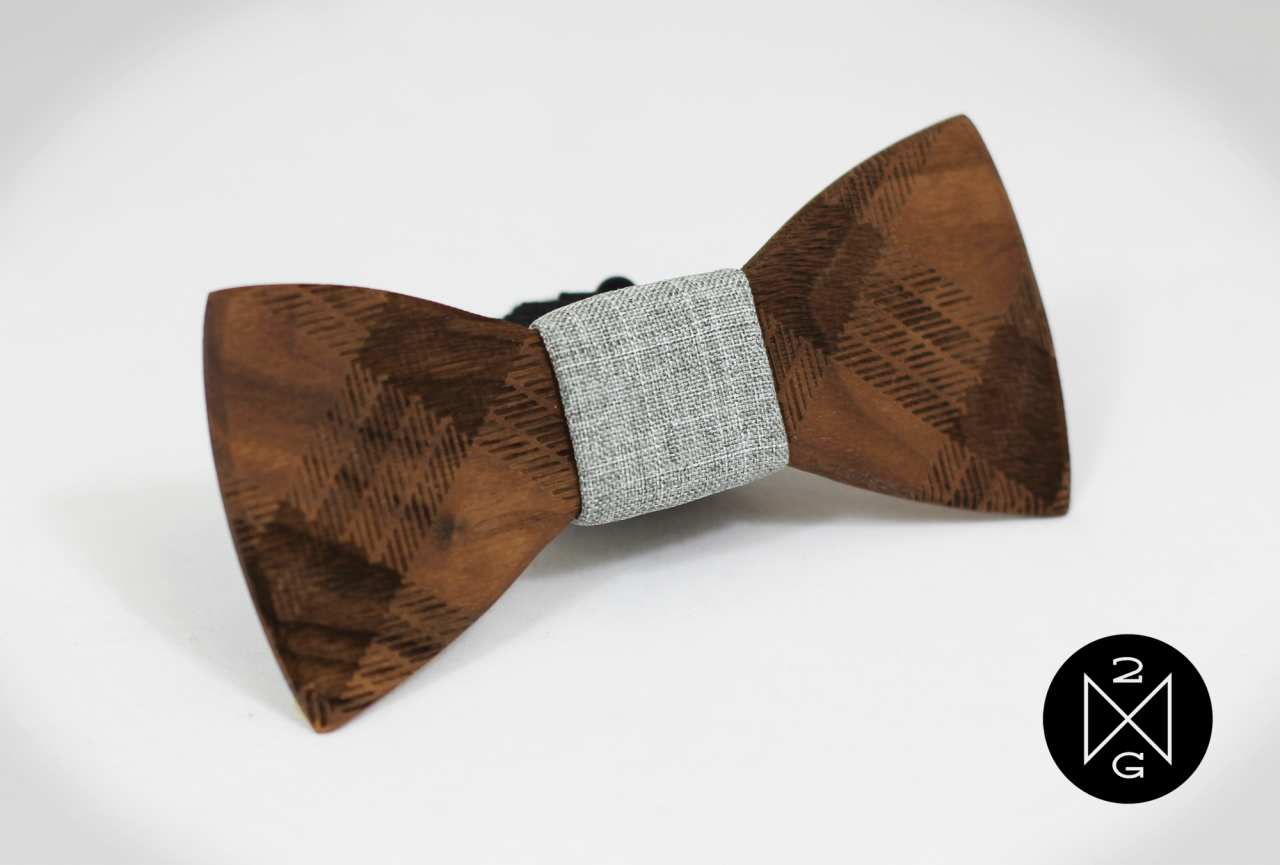 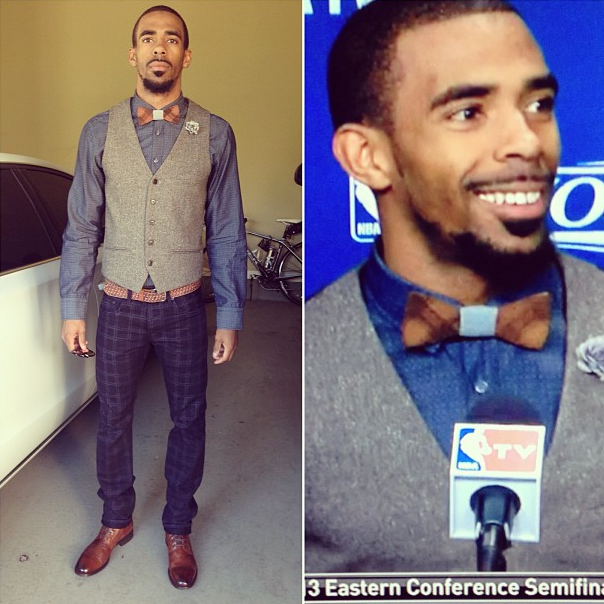 This year more athletes caught the fashion bug, and started to express their individual styles. “Breakout Athletes” are guys who’ve made noise with their hip sense of style throughout 2013. Pro athletes Mike Conley JR, Blake Griffin, Deandre Jordan,  J.R. Smith, Brandon Marshall, and Rajon Rondo  have shown they belong in the discussion for Best-Dressed athletes.

Memphis Grizzlies Mike Conley Jr. keeps it low-key and let’s his style do all the talking. 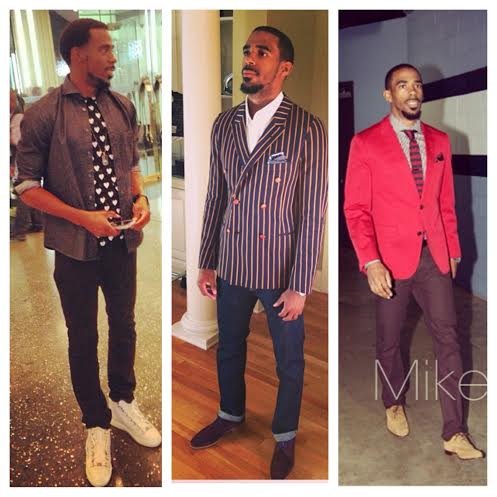 Los Angeles Clippers big men Blake Griffin and Deandre Jordan have shown their individual styles are as exciting as the high-flying basketball games. Thisdsuo makes it look effortless for guys 6″10 and taller to be stylish. Chicago Bears Brandon Marshall is a beast on the football field, but shows he has a soft spot for fashion.
Photos via Instagram

Boston Celtics Rajon Rondo has a smooth look to keep your eyes on, catch him dressed in classic pieces or keeping it casual in hi-tops and a fresh jacket.

NBA baller Paul George made a major fashion statement during the 2013 NBA Playoffs for Game 1 vs. the Miami heat. Paul strolled into the American Airlines Arena wearing a loud green paisley print collar shirt, paired with shiny green pants. He resembled a throwback ball player from the 70’s.

Russell Westbrook is known his eccentric taste in style, but this outfit he elected to wear for the 2013 Kids Choice Awards was umm… very, very different. This outfit caused a social media frenzy.

Victor Oladipo not only scored big by joining the Orlando Magic in this years round one as the second overall pick, but he makes the biggest fashion statement when he wears Google Glasses to the draft!

And what better way to document one of the biggest days of your life by recording it with your eye wear. Victor also scored big on the fashion scale with his ALBA (A Light beyond Appearance) Legacy suit.  Can someone say fashlete in the making?

You can watch Victor’s entire experience through his glasses in this video:

It’s no news that many have argued over who’s a better basketball player Kobe Bryant or LeBron James.

So when they were both spotted wearing the same $487 Givenchy green paisley shirt under a blazer jacket – just 3 days apart – it was no surprise that many fans felt the need to pick who wore it best.

LeBron pairing the shirt with a green shawl collar blazer at a press conference after Miami’s Game 2 win over Milwaukee on April 23rd. 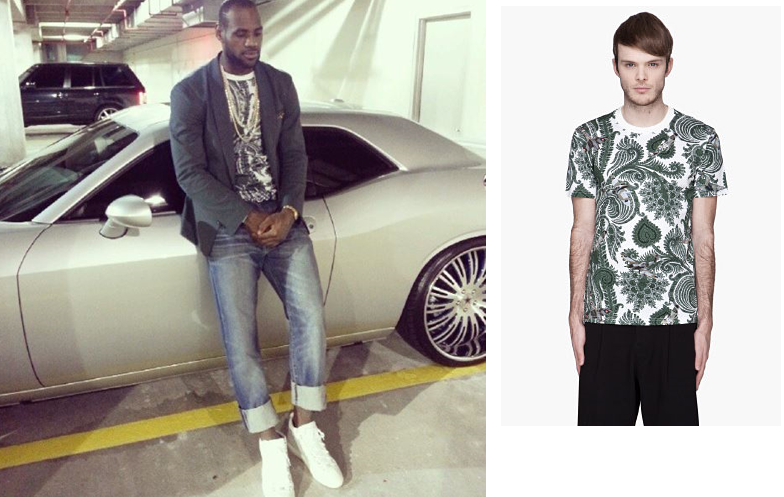 Kobe chose the traditional blazer route on Sunday when he sat behind the bench as the Lakers were eliminated by the Spurs on April 26th. 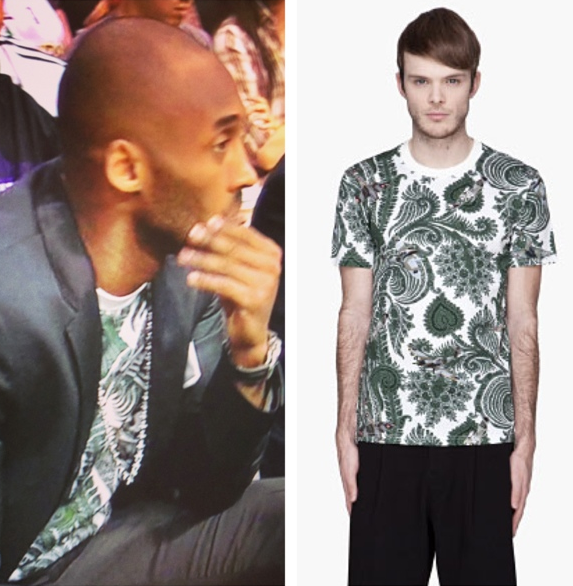 Sports Illustrated Ranks The 50 Most Stylish Athletes In The World